Ramadan the month of Holy Quran

Fasting in the month of Ramadan, like Namaz (Salat) is
a divine command. 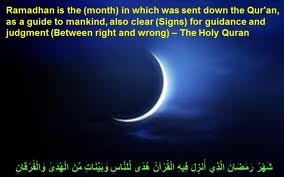 Allah says in the Holy Quran,

It was reserved for Islam to formulate and perfect a form
of spiritual purification for every one of its followers, not
withstanding the state of society they belonged to, and
which could be performed without interfering with their
normal avocations and callings in every day life.

Whatever calling or vocation he is engaged in, does not
hinder a Muslim from carrying out this annual requirement of
the Faith, the fast of this month of Ramadan, which incidentally,
is also one of the five cardinal points of Islamic tenet.

The Muslim fast means a complete abstention from eating or
drinking between daybreak and sunset.

The sighting of the thin sickle of the new moon of Ramadan
heralds for the Muslim the beginning of a month of glory and of
spiritual elevation, when, at Allah's command, he voluntarily
and of his own free will, denies himself between day-break
and sunset, the blessing of food and drink, and surrenders
himself up wholly to Allah, observing the same abstention
throughout the whole month in his thoughts, his speech,
his behavior, his every act.

For this month, for the Muslim, means the triumph of the
spiritual and the pure in his nature over all the grossness and
carnation, which is an inevitable component of our human
make-up.

The Holy Prophet Muhammad (SAW) in the following words
beautifully explains the actual significance of the fast: -

"One who, while fasting, does not guard his tongue from
telling lies, does not refrain from doing bad deeds, is not
respecting his fast and Allah does not approve of mere
abstention from food".

When you are keeping fast, you should not speak ill of anybody,
nor should you be boisterous and noisy. If anybody speaks ill of
you or tries to pick a quarrel with you return him not, but say
unto him that you are fasting.

Divine Revelation:
Ramadan however, has another deeper significance for the Muslim,
Ramadan's greatness is manifest in the fact that Almighty Allah chose
it for the revelation of His Scriptures from time to time.

It was in the very month of Ramadan that the Holy Quran, the last
revealed Book, started descending upon Holy Prophet Muhammad (SAW).

"It testifies: (Ramadan is the month in which was sent down
the Quran as a guide to mankind ...)
(Surah Baqarah 2:185)

But the Holy Quran, the divine revelation from Allah to mankind through
the medium of our Holy Prophet Muhammad (SAW), has remained.
In every Ramadan the Muslims celebrate the spiritual significance of
that divine fact the eternal abiding permanence of the Holy Quran.

During this Holy month therefore, the Muslim takes himself more
assiduously to the reading of the Holy Book of Allah, the standing
miracle of the Holy Prophet Muhammad (SAW), the miracle which
he stated would remain to testify to the authenticity of Allah's message
even after he, Muhammad (S.A.W.) passed away.

Throughout this holy month, therefore, from every Muslim home is heard,
during the day and night, the pleasant and beautiful cadences of
Quranic recitation.

Then there is the Holy Prophet Muhammad (SAW) saying as an incentive
to renewed reading of the Holy Quran especially in this month:

In this holy month of Ramadan it should be the duty of every Muslim to
read the Holy Quran and thereby gain an insight into the Divine secrets.
It breathes peaceful spirit to the human body. It imparts purity to the
human soul and removes many a curtain hanging between man and God.

As the month of Ramadan is a specified period of purification, so the
Holy Quran must carefully be studied by every devotee of Islam for
self-guidance. Allah is the light of the heavens and the earth and
the Holy Quran a light for the seekers of truth. It wards off the evil
effect of unhealthy atmosphere, it sanctifies the cause of the fast
and keeps the true believer in direct communion with Allah, and
it does but speaks His own words.

Only constant experience can tell the tremendous amount of pleasure
one finds in reading the Holy Quran.

like a beacon of hope for the faithful, these heartening words occur
in the Holy Quran to strengthen the hearts of the believing Muslim
in the realness of their whole-hearted surrender to Allah (SWT).

What has the believing Muslim to fear after reading this clear
promise by Allah of His nearness to His servants, not only throughout
this life but also in the hereafter?

In the holy month of Ramadan, especially, this promise of Allah's
has a particular significance for the believing Muslim who dedicates
his prayers and his sacrifices (in the form of his fasts) up to Allah,
the Lord of Creation.
Posted by Unknown at 8:32 PM

Visitors On This Page